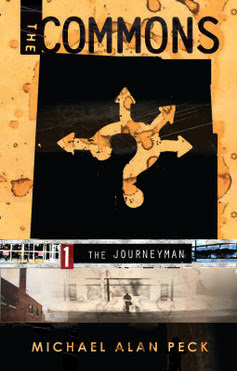 "Paul Reid died in the snow at seventeen. The day of his death, he told a lie—and for the rest of his life, he wondered if that was what killed him."

And so begins the battle for the afterlife, known as The Commons. It's been taken over by a corporate raider who uses the energy of its souls to maintain his brutal control. The result is an imaginary landscape of a broken America—stuck in time and overrun by the heroes, monsters, dreams, and nightmares of the imprisoned dead.

Three people board a bus to nowhere: a New York street kid, an Iraq War veteran, and her five-year-old special-needs son. After a horrific accident, they are the last, best hope for The Commons to free itself. Along for the ride are a shotgun-toting goth girl, a six-foot-six mummy, a mute Shaolin monk with anger-management issues, and the only guide left to lead them.

Three Journeys: separate but joined. One mission: to save forever.

But first they have to save themselves.

The Journeyman is a delightfully bizarre read reminiscent of Alice In Wonderland, though a more grown up version. The story follows the main character, Paul, through a fantastical landscape in a sort of purgatory world built up from his own mind, as well as the minds of those who have passed before him.

Any number of strange and sometimes shocking things appear in this novel. In a world of the mind, anything is possible. The twists and turns will take you on an increasingly fascinating journey and though things tie up nicely in the end, I found enough left open to have me excited and looking forward to the sequel. If it's even half as good as this first installment in the series it will still be well worth the read. If you're looking to go on an exciting, mind bending thrill ride, you can't go wrong with The Journeyman.

Amazon
http://www.amazon.com/The-Commons-Book-Journeyman-ebook/dp/B00L5RI87O
Posted by Anonymous at 5:00 AM